I went out for a follow up video as the planets Venus and Jupiter approached their conjunction and nearest visible separation of 3.0 degrees.  There was a light cloudy haze over the Great Divide, but the planets still shone clear.  Unlike the first video, the moon is no longer up while the two brightest planets are setting.  That is why the mountains are so much darker then in the first video I made.  Also unlike the first video, I was able to capture both planets in the viewfinder at the same time which is awesome!

Oh, and I'm not really sure what the blue/purple bar is in two of the frames of the movie and my video thumbnail, but I'm guessing that it's my turned off headlamp the few times when I needed to walk in front of the camera.  Whatever it is, it's a neat effect.

Some of my Jupiter and Venus photos made it in to an article on Space.com.  I made a video of the two brightest planets setting behind the Flatirons and thought it was good enough to submit to a couple of websites and they picked it up for an article! 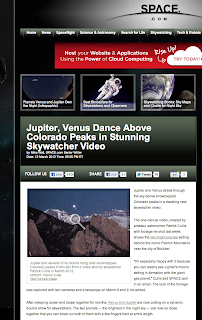 Space.com Article
Posted by Cully at 10:13 PM No comments:

Venus, Jupiter, and the Flatirons

A short and sweet video of Venus and Jupiter setting behind the iconic Flatirons of Boulder, Colorado.  Taken over five days in early March, thousands of pictures were compiled down to make this video.  The two brightest planets are currently in close proximity and have been putting on a wonderful show in the evening sky.

It was a beautiful spring feeling day in Boulder and when the sun set and the warmth lingered enticingly, I grabbed my tripod and headed out to Chautauqua park for a short little hike.  Venus and Jupiter are currently approaching one another in the sky and the moon was at the perfect angle to light up the facade of the Flatirons.  Several climbers were on the First and Third Flatirons climbing under the bright light of the moon. 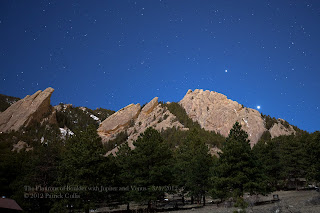 Jupiter and Venus setting behind the iconic Flatirons of Boulder. 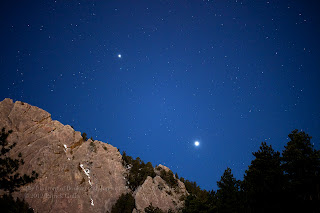 They are the second and third brightest objects in the night sky, dimmer only than the moon. 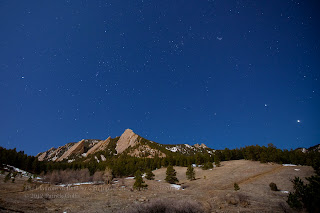 Orion marches across the sky following the planets.
Posted by Cully at 9:07 PM No comments: