http://www.patrickcullis.com/maroon-bells.html
In 2016 I tasked myself with trying to capture unique views of one of the most photographed mountains in the United States. The Maroon Bells outside of Aspen, Colorado. With a long history of night photography I started with the typical wide angle long exposures, pushing them as long as possible until the stars became ugly, stubby little streaks. Or, I would leave the shutter open for fifteen minutes, creating amazingly detailed landscapes with long, artistic streaks of light. What I wanted though was the combination of both. I wanted the beautiful exposures of the mountains captured in the much longer exposures, but with stars as the sharp points of light we know and love.

Throughout the winter it consumed me as I came up with how I was going to do this. Luckily, I owned a large telescope tracking mount for astronomy that I was able to modify with sturdy ball heads and I bought a cart to wheel it out to the viewpoint. Setting up along the waters edge and aligning with the rotation of the Earth, I was finally able to track the stars across the heavens for minutes on end. Splitting my exposure in two, I was able to track the stars for the first half and the landscape for the second half. Since I was using the same exposure for both frames, the mesh point between land and sky was identical in both. Combination became a trivial matter. It's so easy and the results simply blew me away. I hope you enjoy them as much as I did planning and taking them!

My Website:  http://www.patrickcullis.com/maroon-bells.html
Facebook Page:  https://www.facebook.com/PatrickCullisPhotography/
On my third trip out to photograph the Maroon Bells in 2017, I arrived and set up while the moon was still in the sky behind the Bells.  The main even was later, after moonset, when the Milky Way would move behind the mountains.  I tried for nearly an hour to find the right settings for the moon and finally landed on this while trying to capture a crisp reflection in the still water.  Halfway through the exposure, a breeze came ripping down the valley, shimmering the water and causing all the points of light to turn in to big arcs in the water.  I was disappointed at first because I did not have time to take another exposure as the moon disappeared behind the peaks, but once I saw the picture on the back of the screen, I knew I had captured something special.


A moonlit long exposure of the Maroon Bells at night. Bright Mars can be seen streaking toward the mountains on the left.


The Maroon Bells in fall of 2016. With changing aspen leaves, I headed up to the Maroon Bells outside of Aspen, Colorado to photograph under the moon before a predicted storm moved in. The sky never fully cleared, but I was fortunate with one hour of variable moonlight to photograph. The next morning, a heavy, wet snowstorm moved in and retired the leaves for the year.


A single 15-minute exposure as the last-quarter moon rises and shines nocturnal alpenglow upon the Maroon Bells. The brightest streak reflected off the alpine lake is our planetary neighbor Mars.  This was my favorite shot from three trips in 2016 to photograph the Bells.  It is one single 15-minute exposure as the moon just started peaking up above the opposite horizon.  I was blown away with some of the detail and colors in really long exposures out there, and I personally like the star streaks, but I wanted to be able to photograph the landscape as I did in this shot with the points-of-light stars of short exposures.  It would take over a year of planning before I was able to finally make it happen to the level I wanted.


A zoomed in view of the Eagle Nebula and Omega Nebula in the heart of the Milky Way getting ready to set behind the Maroon Bells.
Distant forest fires tinge the sky orange in this long exposure of the iconic Maroon Bells of Colorado.


A thin cloud rising behind the Maroon Bells with the Milky Way behind. This was the third trip out to photograph the Maroon Bells. The sky was a bit brighter since there was a crescent moon (it is still above the horizon behind the mountains and illuminating the cloud) but it had the calmest air creating the best reflection I was able to capture.


The moon ready to set behind the Maroon Bells.


A close crop of the Milky Way passing behind the Maroon Bells of Colorado. Located outside of Aspen, the Maroon Bells are one of the most photographed mountains in North America. On mornings in fall there will be a line of photographers along the entire edge of the water. This night there were only a dozen...


Aspen leaves produce a burst of color in fall near the Maroon Bells.


Fall at the Maroon Bells. Photographed under moonlight in 2016.


Self portrait while photographing the Maroon Bells in fall 2017.

The full resolution image with the ability to zoom on Google Photos.

I've been going back over some of the photos from my balloon flights the past few years and started wondering if I could stitch a few of them together in to a panorama.  Turns out, yes I can!  I can barely believe how well they are turning out.  If you follow the link to my Google+ version it will allow you to zoom in and look around at everything.


A couple of years ago I did another flight in order to capture the moon above the haze of our atmosphere.  I made a video of that launch from some GoPro footage and some other small cameras.
Balloon Flight from Patrick Cullis on Vimeo.
Video and photography from two high altitude balloon launches from Boulder, Colorado. Views of Boulder, Denver, and the Continental Divide from over 85,000 feet as well as video of launch and burst.  This video was from an earlier balloon flight where I was launching in order to capture the moon near the horizon after the package had made it above the bright glow of the atmosphere.  Out of roughly 700 images, the moon was in a grand total of 3...

The balloon starts out roughly six feet across, but by the time it gets to 100,000 feet it is almost 30 feet in diameter!  This sequence of four images is from a GoPro running at 48 frames per second.

I learned about launching balloons working for NOAA measuring the ozone layer.  One of the trickiest places to launch balloons is at the South Pole while measuring the annual formation of the Antarctic Ozone Hole.  I wintered over during the 2009 season and during the six months of darkness the rubber balloons are unable to stretch without the warmth of the sun shinning on them.  We must instead launch the instruments on large plastic balloons.

My website: www.PatrickCullis.com
I have more images from above Colorado at my page on High Altitude Balloons.
Night photography from Antarctica are here:
Photography of Boulder's iconic Flatirons are here:

Warning:  I have read the FAA regulations on free flying balloons many times and they are very specific about size, density, and weight restrictions.  If you want to fly a high altitude balloon, please be sure that you are not breaking any laws. 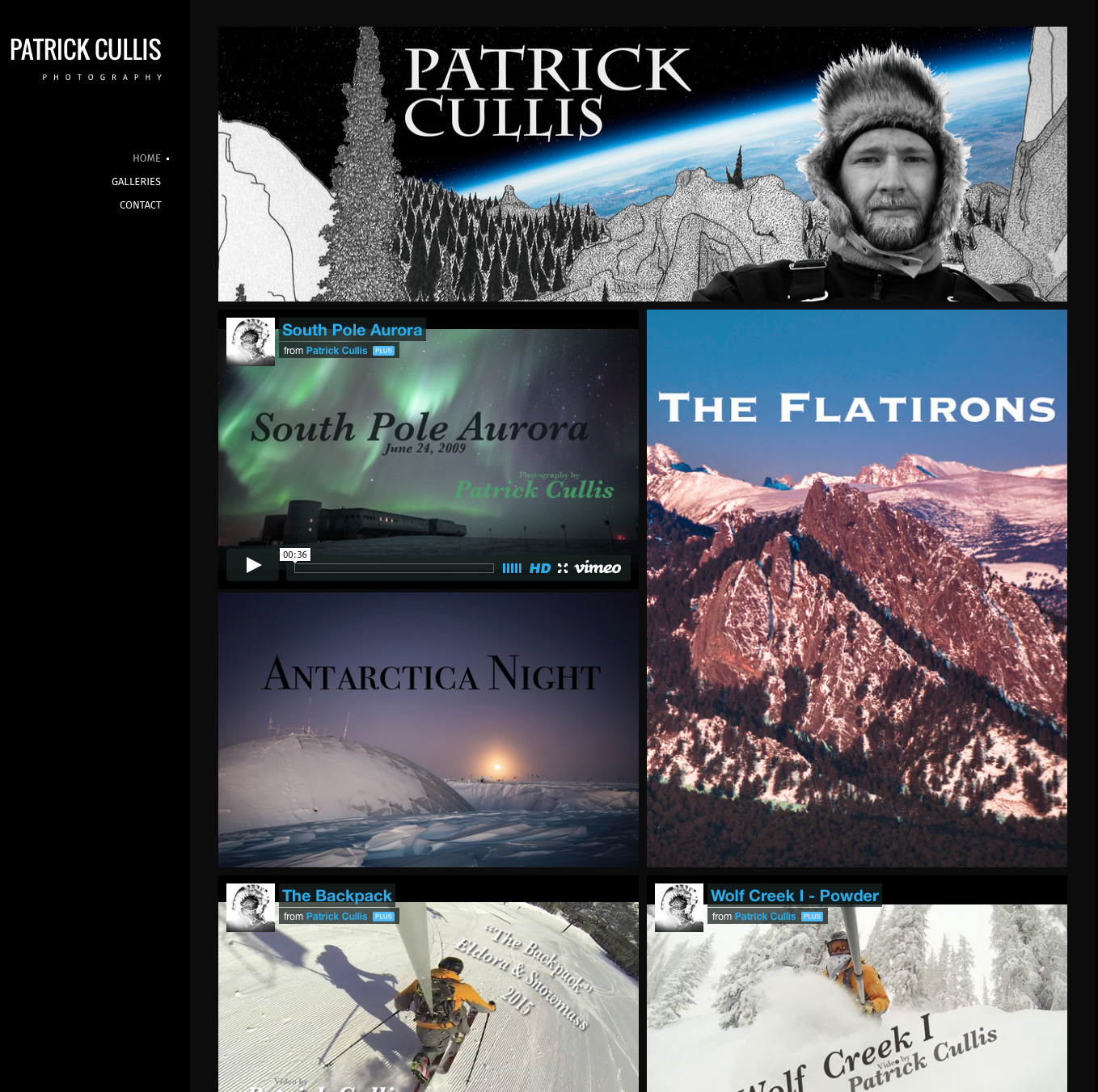 
I flew my camera on another balloon this week to try and capture the Aspen leaves changing up in the mountains.  It was pretty excellent conditions and I think I got some good stuff!  This photo is from 95,000 feet above Floyd Hill.  We had to hike a little ways, but it was well worth it.


I also had my GoPro taking video of the balloon when it popped and got some incredible images of the latex balloon bursting.  My favorite is the one where it just starts showing the first sign of popping, but most people prefer the later ones when it really gets shredding.  The latex dust "sphere" left behind is also pretty cool.
Posted by Cully at 3:18 PM No comments:


The Antarctic Ozone Hole from Patrick Cullis on Vimeo.

If you ever wondered, "what is the Antarctic Ozone Hole?"  "Is the ozone hole always there?"  "How bad is the ozone layer?"  "Or, what did Patrick do down in Antarctica other than photograph aurora?"  This video is for you!
Posted by Cully at 5:45 AM No comments: 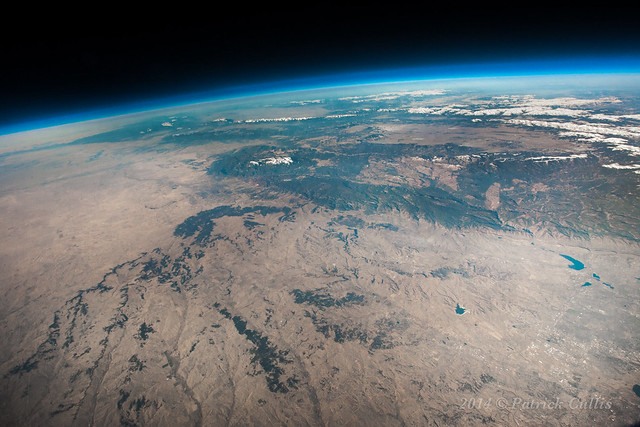 The Southern Colorado Front Range looking towards the Black Forest and Colorado Springs, and the snow-capped rocky mountains, including Pike's Peak in the isolated collection of snow-capped peaks!
Posted by Cully at 5:00 AM No comments:

I went to the Galapagos Islands for work and then a week of vacation and got some good photos.


Check out my albums here on flickr
Posted by Cully at 9:23 PM No comments: